DIRECTOR OF ANALYTICS, The Milwaukee Company

Financial markets tested investors’ resolve in 2022 to a degree rarely seen in recent years. Diversification and deft money management decisions helped mitigate the pain, but sharp losses weighed on most markets around the world last year.

Analysts are debating if 2023 will bring some relief. What is clear is that the New Year begins with the same set of risk factors that weighed on the outlook in late-2022, including the war in Ukraine, elevated inflation, rising interest rates and slowing economic growth that threatens to slip into recession.

The global economy is headed for “a tough year, tougher than the year we leave behind,” predicts the International Monetary Fund Managing Director Kristalina Georgieva.

No one can dismiss the possibility, but forecasts should be viewed cautiously. A year ago at this time, remember, the outlook was relatively rosy.

The future’s forever unclear, but careful attention to risk management and asset allocation remain valuable tools in any environment. All the more so when market volatility is high and markets are struggling to price in uncertainty.

A World of Hurt

Reviewing market activity in 2022 across the primary asset classes offers a reminder of how strong the headwinds were blowing, based on a set of proxy ETFs. As the table below shows, only a broad measure of commodities posted a gain last year. The iShares S&P GSCI Commodity-Indexed Trust (GSG) rose 24% in 2022, extending a strong gain in the previous year.

Otherwise, losses dominated stocks in the US and around the world last year. Real estate shares and the U.S. bond market also retreated, posting the deepest calendar-year loss in more than half a century as the Federal Reserve aggressively raised interest rates. 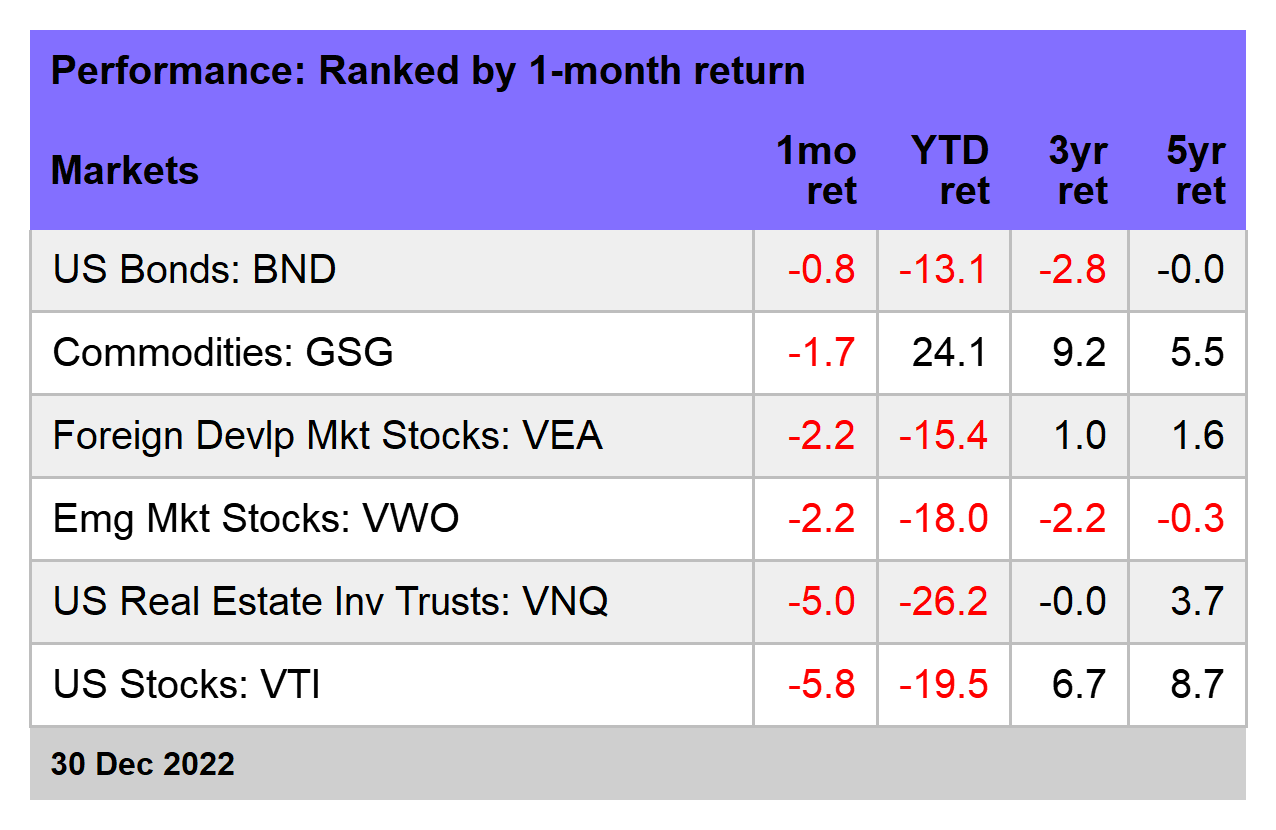 Although stocks overall took it on the chin in 2022, within the equity market there was a change in leadership that may be a sign of things to come. Value stocks rebounded after a long run of lagging growth stocks. The Vanguard Value Index Fund (VTV) retreated by a mild 2% last year, a strong relative performance compared with the 34% loss for Vanguard Growth (VUG). The shifting fortunes in favor of value investing suggest that a major rotation is underway in the stock market. In a world that’s perceived as riskier compared with the pre-2022 period, the allure of investments thought to be safer may herald the start of an extended recovery for shares trading at lower valuations vs. growth stocks. 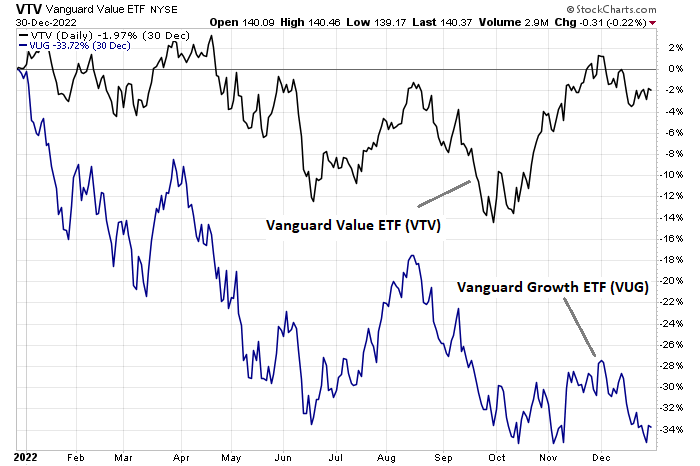 U.S. bonds are also looking more attractive after a year of pummeling. Vanguard Total U.S. Bond Market Fund (BND) tumbled 13% in 2022, an especially harsh setback in a year when stocks fell even harder. The bright side of fixed income’s fall is the commensurate rise in yields (bond yields move inversely with bond prices). The 10-year U.S. Treasury Note ended the year at a 3.88% yield, or near the highest level in 14 years. 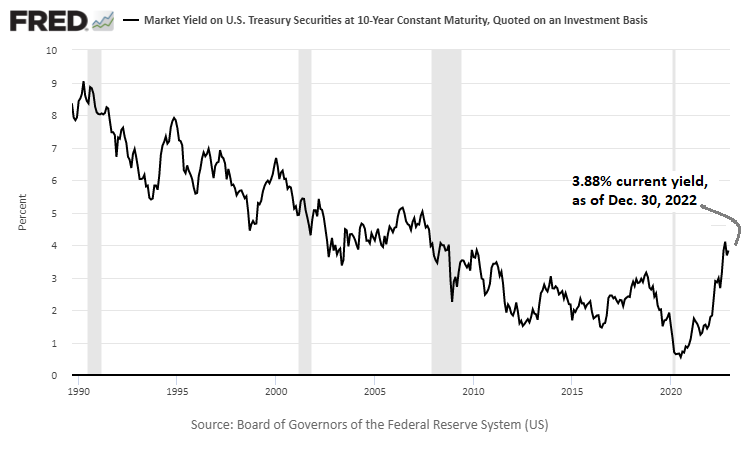 Inflation is even higher, at least for now, and so the trailing payout rates for nominal bonds is negative in real (inflation-adjusted) terms. But inflation-indexed Treasuries are trading at relatively attractive rates. A 10-year Treasury Inflation Protected Security (TIPS) yields a real 1.58% at year-end. That’s close to the highest inflation-adjusted payout rate in over a decade and marks a clear break from roughly two years of negative real yields.

Despite the relatively attractive yields of late, a key decision hangs over the bond market for 2023: Is inflation or recession the bigger risk?

After surging in 2021, inflation appears to have peaked. U.S. consumer prices topped out at an annual pace of 9% last June – a 40-year high. Inflation moderated to a bit more than 7% by November, but that’s still far above the Fed’s 2% inflation target. Unsurprisingly, the central bank is still expected to lift interest rates to tame inflation, although Fed funds futures are expecting a 1/4-point increase at the next Fed meeting (Feb. 1), which would be the smallest hike so far. Some economists say that may be the last rate increase for the cycle, although much depends on how the incoming inflation numbers stack up over the next several months.

If the Fed is nearly done with tightening monetary policy, there’s a case for buying bonds, which would probably rise in price once it becomes clear that rate hikes have ended. The allure of fixed-income securities looks even stronger if the recession forecasts prove to be accurate. When the U.S. economy contracts, history suggests the bond market will rally as investors put a premium on safe-haven assets during periods of recession.

The wild card is the potential for inflation to stay hotter than expected, which may persuade the Fed to raise rates for longer than expected. In that case, the bond market could suffer a new round of selling. But the odds look increasingly skewed toward lower inflation and slower growth, bordering on recession.

Will Commodities Rally For A Third Year?

Commodities delivered a crucial source of portfolio ballast in 2022, but after two years of strong gains there are questions about the prospects for the asset class in 2023. But as Wells Fargo observes, history suggests there’s a case for expecting the positive momentum to continue. 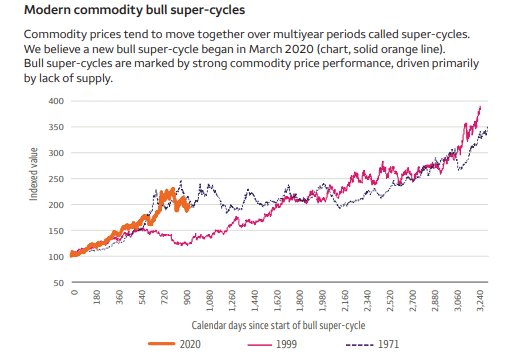 Asset Allocation Is Still The First Line Of Defense

Although 2022 was a rough year for most markets, the good news is that expected returns are higher overall. Price changes in the short term are often noise, but in the longer run prices move inversely with projected performance. As a result, after a year of sharp losses the outlook for most risk assets has improved for medium- and long-term horizons.

The leading example can be found in the bond market, where yields have increased. As noted above, Treasury payout rates ended the year at significantly higher levels vs. the year-ago comparison. Since current yields are a rough approximation of expected return, the performance outlook for fixed-income securities has improved significantly.

Although there are several risks lurking that could further subdue financial markets in the year ahead, it’s important to consider what could go right. One possibility is that inflation continues to ease, which helps lift prices for stocks and bonds. In other words, the mirror opposite of 2022, when equities and fixed-income securities suffered setbacks.

History shows that once inflation peaks, the shift tends to be favorable for stocks. In the current climate, peaking inflation will likely support bond markets too because softer pricing pressure will provide the Federal Reserve and other central banks with a rationale to pause rate hikes and perhaps cut rates later in the year.

In other words, incoming inflation data may be the single-most important investment indicator for the near-term outlook. One way to estimate real-time inflation expectations is by monitoring the Treasury market’s implied forecast. The 5-year breakeven rate – nominal 5-year Treasury yield less its inflation-indexed counterpart – reflects a slide in the inflation outlook to roughly 2.3% at year-end from around 3.6% in March, when the Fed starting lifting interest rates. A further decline – particularly if it falls below the previous low of 2.14% -- would strengthen confidence that inflation has peaked and will fall further in 2023. 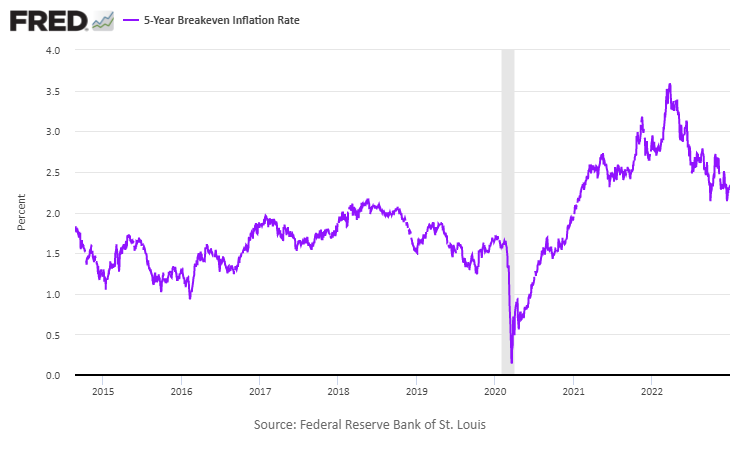 In that scenario, it’s reasonable to assume that the Fed will end rate hikes after an expected 25-basis-points increase on Feb. 1.

A less-hawkish central bank might provide the spark that ends the bear market in stocks and bonds. Unfortunately, it’s still premature to confidently forecast that a Fed pivot is imminent. But sometime in the first quarter it’s likely that the next phase for monetary policy will become clearer. I address that in our next quarterly newsletter.