Stocks and bonds stabilized in May as broadly-defined commodities continued to lead global markets by a wide margin.

The S&P Goldman Sachs Commodity Index (GSCI) rose nearly 4% in May, extending a string of gains for the asset class this year. High inflation and supply constraints triggered by the Ukraine war continued to support prices for energy, agricultural products and other raw materials. For the year though last month, GSCI surged 52%, far ahead of stocks, bonds and real estate shares. 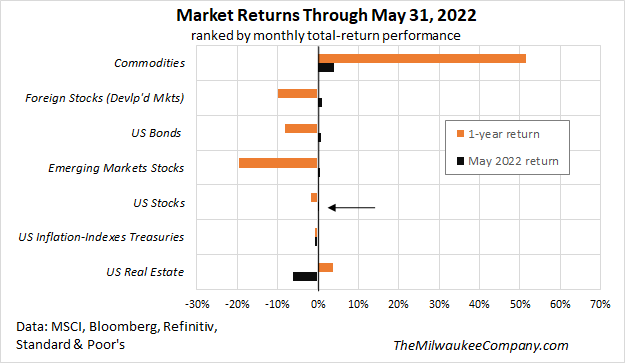 The bull market for stocks may not be set to resume, but for the moment it appears that the correction is at least on pause. The S&P 500 Index was flat last month, offering a respite from the losses that have weighed on the market for much of 2022’s trading action so far. For the trailing one-year period, stocks are down slightly.

The question is whether the flat performance for equities is a sign that the worst has passed? By some accounts, the market hasn’t fully discounted higher inflation and slower economic growth and so stocks are still susceptible to further weakness in the months ahead. One reason for caution: the cyclically adjusted price-to-earnings ratio (CAPE), a popular measure of U.S. equity market valuation, has only pulled back to 32.5 for May, a level that suggests that American shares are still highly valued. 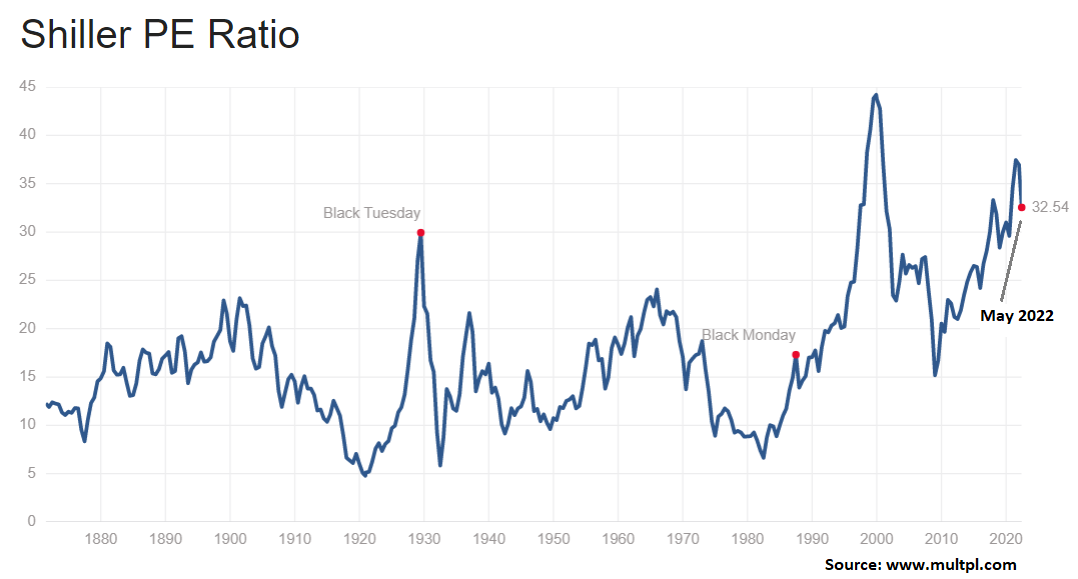 A counterpoint is that the U.S. economy still looks resilient, providing a degree of support for equity prices. A business cycle index published by the Chicago Fed shows that U.S. output grew at an above-average pace in April. The regional Fed bank reports: “All four broad categories of indicators used to construct the index made positive contributions in April, and three categories improved from March.”

In short, the odds appear low that the U.S. is about to suffer a recession in the near-term. Although some economists argue otherwise, recent data suggest that the threat is low for the near term. Job openings in April, for example, remained near a record high while nowcasts for GDP in the second quarter are pointing to a rebound from Q1’s loss. The Atlanta Fed’s GDPNow model (as of June 1) estimates that Q2 output will recover with a modest 1.3% increase following 1.5% decline in the first three months of the year. That’s hardly a robust expansion, but the positive estimate implies that the economy isn’t about to contract.

U.S. bonds were also flat in May after persistent losses that dominated fixed income previously in 2022. The Bloomberg US Aggregate Bond Index edged up slightly last month, although for the one-year window this broad measure of Treasuries and investment-grade credit is still nursing a loss of more than 8%.

Despite the stable performances for stocks and bonds last month, it’s probably premature to bet against commodities. One factor that may keep raw materials prices rising is China, a critical source of global demand. The country’s decision to ease it restrictive Covid lockdown policy in Shanghai suggests that the recent slowdown in the world’s second-largest economy will revive in the months ahead. In turn, firmer growth will boost demand for commodities in a world where supply shortages will endure as long as the Ukraine war drags on.