U.S. equities rebounded, albeit modestly in March, 2022. The S&P 500 Index recovered 3.7% on a total return basis in March, although the large-cap American shares index is still in the hole by 4.6% year to date. The Nasdaq and Dow Industrials posted gains too: 3.4% and 2.3%, respectively.

But it was the sharp increases in prices of raw materials that dominated market activity in the final month of 2022’s first quarter. The CRB Commodities Index, a broad measure of prices, rose 9.7% in March. For the trailing one-year window, the benchmark has surged nearly 60%. The key catalysts: the war in Ukraine and elevated inflation. 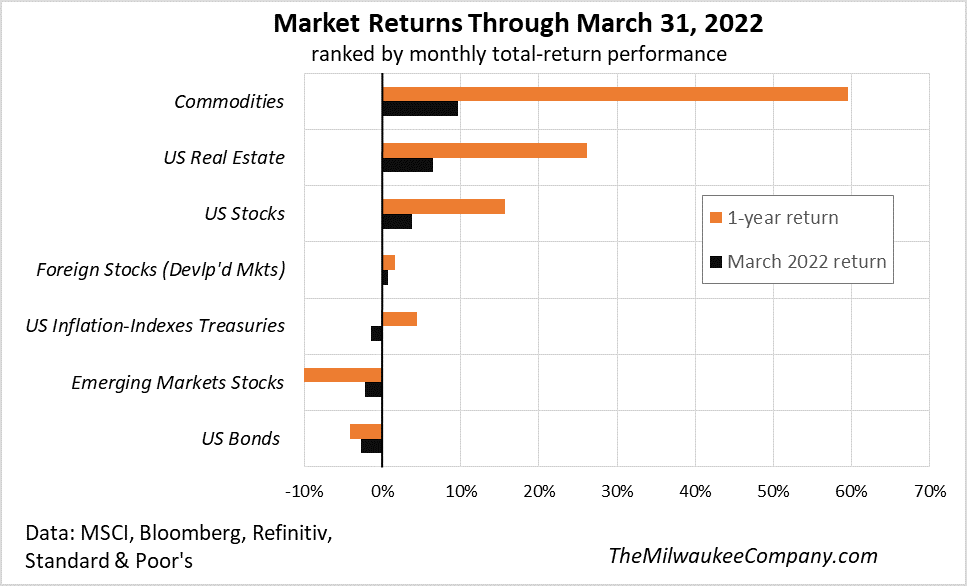 Since Russia invaded its neighbor in late-February, the war has disrupted exports of critical raw materials from both countries. A mix of sanctions imposed by the West and fallout from war has further exacerbated sharp spikes in prices for energy, agricultural products and industrial metals.

A recent report from BMO Capital Markets noted: "The storm of supply disruptions, logistic issues, sanctions, financial short squeezes and purchasing manager panic has seen some of the most dramatic metals and bulk commodity price moves seen in history over Q1 2022.”

Securitized real estate fared quite well in March too, jumping 6.5%, based on the MSCI U.S. REIT Index. The rally takes some of the sting out of two straight monthly declines for property shares.

The Ukraine war is grabbing most of the headlines, but expectations that higher inflation will continue to push up interest rates is no less a concern for financial markets. The Federal Reserve began raising rates in March, slightly, but this is only the beginning, according to Fed Chairman Jerome Powell.

The current 0.25%-to-0.50% range for the Fed funds target rate is expected to rise to 2.0% to 3.0% by the end of the year, based on forecasting via Fed funds futures. Even by that standard, the central bank will remain well behind the policy curve relative to current inflation.

Prices measured by the Personal Consumption Expenditures Index shot up 5.4% on a year-over-year basis after stripping out food and fuel costs. This so-called core inflation benchmark, which the Fed follows closely, is far above the central bank’s 2% inflation target and even more so vis-à-vis the current Fed funds rate.

Chairman Powell recognizes the pressing need to play catch-up, observing in March 21 testimony to Congress: “There is an obvious need to move expeditiously to return the stance of monetary policy to a more neutral level, and then to move to more restrictive levels if that is what is required to restore price stability.”

Analysts are divided over how much of a threat higher interest rates pose for financial markets, but this much is clear: the distress for fixed-income securities has been significant this year. Over the past 12 months, the Bloomberg U.S. Aggregate Bond Index has shed 4.2%.

A key question in the months ahead is whether the U.S. economy will remain strong enough to support more Fed rate hikes? For now, there are few signs that growth is buckling. Payrolls rose 431,000 in March, the Bureau of Labor Statistics reports. That’s down from February’s sizzling increase, but for the moment the economy’s forward momentum remains solid, based on the labor market.

Nonetheless, the rest of the year may bring bigger challenges, due to the combination of higher inflation and the ongoing blowback from the Ukraine war on the global economy. Moreover, there’s a joker in the deck. History suggests that the central bank’s ability to engineer soft landings for the economy is a rare bird.

Tightening monetary policy to pinch pricing pressure without triggering a recession isn’t impossible, but “you’ve got to be both lucky and good,” notes Alan Blinder, a Princeton University economist who served as vice chair of the Fed in the 1990s.

A mixed future, in short, appears to be a reasonable assumption for economic risk at the moment. In turn, the path of least resistance for stocks and bonds at this point may be trading in a range until there’s more clarity on the longer-term costs of the Ukraine war and the Fed’s ability (or not) to restrain inflation.