If you owned cryptocurrency this year, you’re probably sitting on hefty gains.  Or not.  After spectacular increases, several coins came crashing down in the last few weeks.  If this rollercoaster ride describes your experience, you’re definitely not alone.  Cryptocurrency has left a lot of both professional and amateur traders scratching their heads in 2021, and it’s easy to see why.

Coronavirus pandemic relief programs have put thousands of dollars into the hands of Americans, helping to propel investments higher across the board, particularly none more so perhaps than crypto assets.  Bitcoin is up 371%, Ethereum is higher by 1,193%, and other leading cryptocurrencies have also enjoyed massive returns year to date.

But with crypto prices dropping sharply in the last few weeks, and rumors of looming regulatory changes, the landscape appears to be changing.  What do investors need to know about cryptocurrency moving forward?  Here are some key fundamental attributes of cryptocurrencies that every investor should know before investing:

1. Cryptocurrencies are not legal tender in the U.S.  In other words, they are not required by law to be accepted as a form of payment.

3. Some coins, such as Bitcoin, have a finite number that will reach circulation.  By contrast, Ethereum and several others do not.  Uncapped crypto is more vulnerable to inflation.

4. The speed that new coins are “mined” by computers, or released into circulation, depends on the cryptocurrency – factors that will influence demand and scarcity.  Bitcoin, for example, is mined at the rate of 12.5 coins per verified block, which is halved every 4 years.

5. Ease of use and means to transact with the cryptocurrency matters.  The biggest names tend to earn the most trust, in part because they have the most options for use as well as ways to buy and sell.

Proponents believe cryptocurrency can bring unconventional benefits to an otherwise conventional investment portfolio.  One of the most discussed is protection against a decline in the value of the dollar.  Unprecedented levels of federal government stimulus programs to combat coronavirus suggests those concerns aren’t going away anytime soon.  Some have gone so far to suggest the cryptocurrencies could supplant the dollar as the world’s reserve currency.  Investing in cryptocurrencies can be a way to hedge these risks.

Cryptocurrency is also considered a hedge against inflation and rising interest rates, which can also be a product of misguided government monetary policies.  Venezuela is a case in point.  Its currency has been so ravaged by hyper-inflation that its citizens have begun using Bitcoin and other cryptocurrencies as an alternative to the Venezuelan bolívar as a medium for exchange.

That being said it’s important to recognize that Bitcoin and other cryptocurrencies are still far from being adoptable as currency proxies globally.  One of the biggest impediments to their doing so is their volatility – which refers to the degree of variation in the price of a given security or asset over a specific time frame.  For example, the following is a price chart for Bitcoin over the last year. 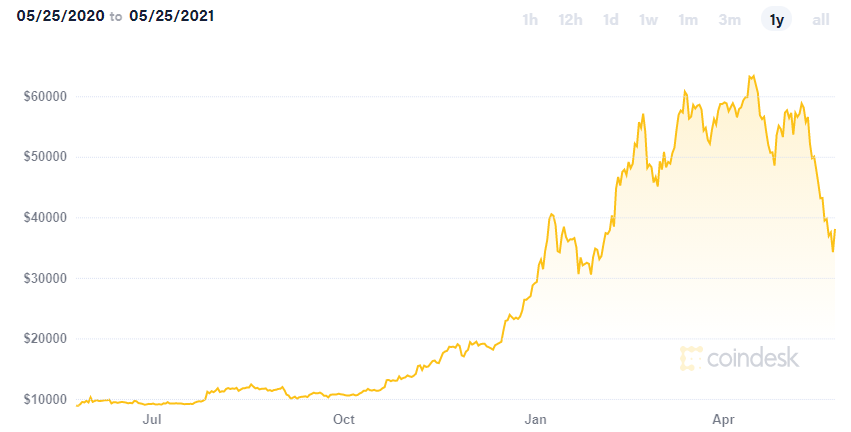 Another hurdle cryptocurrencies need to overcome is the energy needed to mine them.  Elon Musk made headlines by announcing Tesla’s suspension of Bitcoin as payment due to the environmental cost of mining it.  As valuations increase and more people invest in crypto, the interest in coin mining and verifying transactions increases as well.  Accordingly, the related computing operations and electricity demand increase, which in turn triggers higher usage of fossil fuels that plague our environment.

It’s been said that the future has a way of arriving unannounced.  The future for cryptocurrency is far from certain, but there are conclusions we can draw from what has transpired to date.