Director of Analytics, The Milwaukee Company

The United States faces several economic challenges in the years ahead, but perhaps the most challenging is slowing population growth.

Recent demographic data shows that America is on the verge of a baby bust, assuming it hasn’t already started.  The 2020 census figures report that the U.S. population growth rate continues to slow, slipping to a gain of just 7.4% for the past decade – the lowest pace since the 1930s and the second-lowest on record.

More troubling are numbers from The National Center for Health Statistics, which reported in May that the U.S. general fertility rate dropped to 55.8 births per 1,000 women aged 15–44.  The latest reading is well below the statistical replacement rate that keeps a population steady. 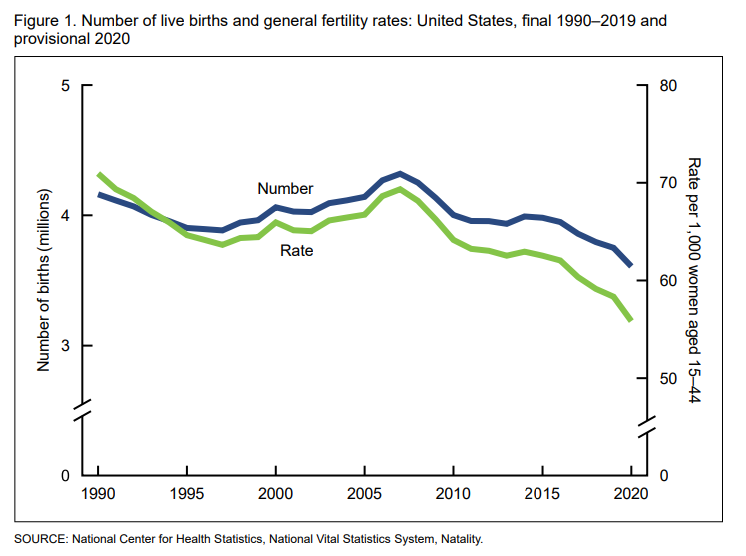 This is old news.  The fertility rate for the U.S. has often fallen under the replacement rate since 1971 – and has done so persistently since 2007, according to government data.  More of the same is expected as the population ages, raising a variety of economic challenges.

A few years ago, a demographer at the U.S. Census Bureau predicted that “the aging of baby boomers means that within just a couple decades, older people are projected to outnumber children for the first time in U.S. history.”

The trend has bearish implications for the economic outlook.  As the number of younger people shrink as a share of the population, fewer workers will be forced to support the rest of society.  The trend points to slower economic growth, lower productivity, and higher taxes on the remaining workforce.

The U.S. is hardly alone with slower population growth.  As analysts at the International Monetary Fund recently observed, “For the first time in modern history, the world’s population is expected to virtually stop growing by the end of this century, owing in large part to falling global fertility rates.”

Even China, with the world’s highest population, is now struggling with decelerating growth for its working-age population – an acute problem for a country that has strict limits on immigration.  The same challenge has long plagued Japan, where a demographic headwind has been a key challenge for the country’s increasingly stagnant economy.

“There are various predictions on what will happen if the number of births keeps falling, but one thing is certain.  Current systems, including the social security system, will no longer be functional,” warns Masaji Matsuyama, a former minister who monitored Japan’s declining birth rate.  “It will be a crisis in which the very existence of the nation as we know it is at stake,” he recently told Reuters.

The U.S. has historically been an outlier in attracting immigrants, which boosts the labor pool and juices economic growth.  As a result, America’s relatively open-borders policy has helped sidestep the economic challenges that are otherwise lurking for a country with a shrinking working-age population.

However, the U.S. is on the verge of losing this advantage because America’s 40-year-old U.S. immigration rules are in dire need of updating.

Fixing the problem would favor U.S. interests on several fronts, including promoting economic growth.  “Slow population growth, at least in the United States and a lot of other developed countries, will become a dire age dependency problem,” predicts William Frey, a senior fellow at the Brooking Institution’s metropolitan policy program.  “It puts a big strain on the rest of the population.”

On his first day in office, President Biden signed six immigration-related executive actions and outlined a sweeping immigration reform measure that would create a pathway to citizenship for the roughly 11 million immigrants living in the country illegally.  Since then, he signed executive orders defunding border wall construction and winding down the former administration's controversial asylum program at the southern border.  Republicans have objected that these actions have undermined border security.