The stock market started 2022 with a downside bias, and the selling extended into February – with a crucial difference. Inflation was the primary reason for the equity market’s struggles in January, whereas February witnessed the start of a war in the Ukraine, an event with global ramifications. 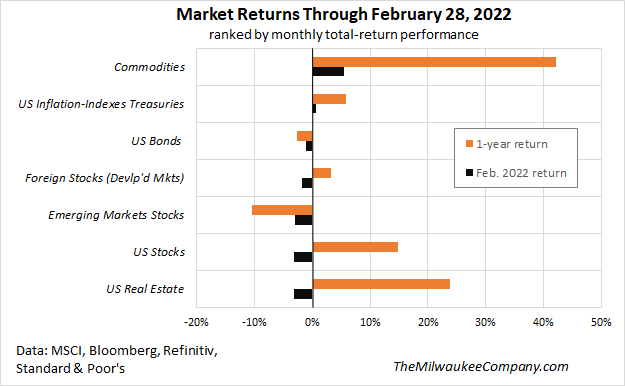 Ongoing concern about inflation helped lift inflation-indexed Treasuries last month. The S&P U.S. TIPS Index edged up 0.7% in February. For the one-year period, the benchmark is ahead by 5.9% on a total-return basis.

Nonetheless, U.S. bonds overall fell last month. Expectations for higher interest rates are the reason. Some analysts are weighing the possibility that the Federal Reserve may delay rate hikes if the war drags on and takes a bigger bite out of global economic growth.

For now, the Fed is still expected to start raising rates later this month at the FOMC policy meeting. Economic fallout from the Ukraine war could delay the arrival of tighter monetary policy, but as of this writing the market continues to anticipate that the central bank will begin tightening policy in March. Fed funds futures are currently pricing in a near certainty of a rate hike on March 16, based on CME data.

U.S. stocks lost ground for the second consecutive month in February. Case in point: The S&P 500 Index fell 3.1% in February and is now down more than 8% year to date. The combination of elevated inflation risk and the uncertainty of war and how it impacts the economy proved to be the primary culprits.

The baseline assumption is that the events in Ukraine, and the blowback for Europe, will have limited effect on America.  If that proves to be true, then a case could be made that much of the damage to U.S. stocks attributable to the war has already been done.

Then again, the U.S. economy was already slowing before the war and the headwinds are likely to strengthen. The Atlanta Fed’s current nowcast (as of February 25) for economic growth in the first quarter is a weak 0.6% increase (seasonally adjusted annual rate) -- dramatically below the strong 7.0% increase in last year’s fourth quarter.

The recent rise in inflation was a key driver of commodity prices. Supply shortages related to the Ukraine war have only strengthened the bullish trend for energy, metals and other raw materials. As Western nations increasingly cut off economic ties with Russia, markets are pricing in the likelihood of supply shortages for a number of key commodities.

Notably, Russia is a major exporter of crude oil and natural gas. Meanwhile, Ukraine and Russia together provide nearly a quarter of global supplies of wheat. As war interrupts these flows, prices are surging.

"The range of near-term price outcomes for commodities has become extreme, given the concern of further military escalation, energy sanctions or potential for a cease-fire." Goldman Sachs advised in a research note earlier this week.

Between the rock and the hard place

The main risk factor for the economy at the moment is energy prices, a key input for headline inflation. General pricing pressure is already elevated and the Ukraine war will likely exacerbate the trend.

The challenge for the Fed is figuring out how to adjust monetary policy for two conflicting developments. On the one hand, surging inflation clearly calls for tighter policy. But with the global economy in an increasingly precarious spot as the war continues, the case for tighter policy is becoming muddled.

“The Fed is in a box, inflation is running at 7.5%, but they know if they raise interest rates, that will tank markets,” says Desmond Lachman, a senior fellow at the American Enterprise Institute. “The policy choices aren’t good, so I don’t see how this has a happy outcome.”

History isn’t especially helpful at this point. In the post-World War II era, nearly every spike in U.S. inflation has reversed during or shortly after an economic recession. The key question: Is it different this time?

Although the Federal Reserve’s track record isn’t encouraging, a new recession isn’t fate. But much depends on how the Ukraine war evolves, how long it lasts, and how much damage it throws off to the world economy. Until there’s more clarity on this front, it’s fair to say the outlook for the economy and the financial markets is even more hazy than ususal.