Director of Analytics, The Milwaukee Company

The CRB Commodities Index, a broad measure of raw materials prices, rose nearly 10% in January. The recent surge in inflation and expectations that pricing pressure will remain hot for the near-term future continued to light a bullish fire under this asset class overall.

U.S. stocks didn’t escape the selling: the S&P 500 Index lost 5.2% in January. The tumble marks the weakest calendar-year start for the benchmark since 2009. 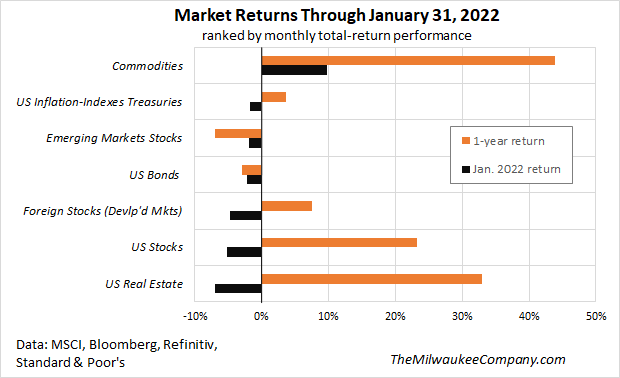 Despite the generally bearish launch to the year, the longer-term trend remains mostly positive for asset classes. Investors who bought U.S. and foreign-developed markets stocks a year ago are still sitting on robust gains. The S&P 500 Index in particular is up more than 23% on a total-return basis for the trailing one-year window through January’s close.

Headwinds for bonds… for now

Meanwhile, the trend for U.S. bonds remains weak. Fixed-income securities posted a loss in January and over the trailing one-year window. The Bloomberg Aggregate Bond Index fell more than 2% last month and is under water by 3% over the past year.

A key reason for the headwinds in the bond market: persistently high inflation, which has convinced the Federal Reserve to start raising interest rates next month. Fed funds futures are currently pricing in a near-certainty that the central bank will lift its current 0%-to-0.25% target rate at the next monetary policy meeting on March 16, and several additional rate hikes appear to be on the horizon.

The Fed’s plans for tightening are no secret and the market’s been pricing in a shift to tighter policy for months. The benchmark 10-year Treasury yield rose steadily in January, reaching roughly the 1.80% mark, a pandemic high.

The question is whether this key rate will continue rising?  As long as the 10-year yield holds below 2%, the recent rise in this benchmark rate can be explained as a normalizing shift as pandemic-related effects fade and something approximating pre-coronavirus conditions return. As a result, the 10-year’s rise so far does not yet indicate a break with the multi-decade trend of falling yields. A clear breach above 2% might be seen as a sign that rates can run higher for longer.

Two key issues that could change the near-term calculus for expecting higher yields: 1) geopolitical risk related to a possible invasion of Ukraine by Russia; and 2) a Federal Reserve policy error vis-à-vis lifting rates too far, too fast relative to what the economy can handle.

As we write, the massing of Russian troops on Ukraine’s border suggests that a war that involves Europe and the U.S. in some capacity is possible, and perhaps likely. In that scenario, a rush to safe havens – including U.S. Treasuries –would likely drive up bond prices and cut yields (bond prices and yields move inversely).

Meantime, although recession risk remains low at the moment, some forecasters are expecting several rate hikes this year. If and when monetary policy becomes too tight and triggers a recession, inflation would probably cool and interest rates fall, perhaps dramatically.  The Federal Reserve’s track record on raising interest rates by an appropriate degree in a timely manner is mixed, at best. As MIT economist Rudi Dornbusch famously quipped a number of years ago: U.S. business-cycle expansions don’t die of old age; they’re murdered by the Fed.

What about the coronavirus? That’s always a factor these days, but for now it appears that Omicron risk has peaked. The potential for a new variant that creates fresh havoc can’t be ruled out, but at the moment there’s a case for cautious optimism on this front. As a result, the potential for surprises looks far more reliant on developments related to Federal Reserve policy and tensions on the Ukraine border.