Even by the standards of widespread selling throughout much of 2022, June’s losses are striking. Striking because nothing was spared. The one asset class that had been offering relief this year – commodities – reversed course last month.

For the rest of the field, a bearish familiarity persisted. Stocks in the U.S. and around the world continued to slide in June, as did real estate investment trusts (REITs) and U.S. bonds. 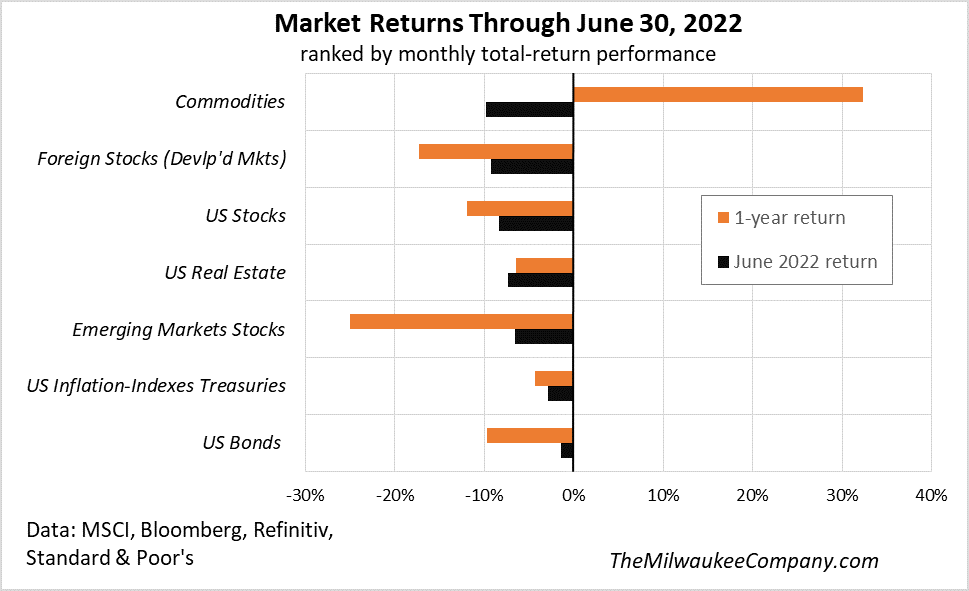 Weighing on investor sentiment is a mix of macro headwinds, including high inflation, rising interest rates and the expectation that recession risk is stalking the U.S. and the global economy.

Although the formal economic numbers continue to show the U.S. economy is still expanding, an increasing number of warning signs are taking a toll on market sentiment. Weaker-than-expected consumer spending in May, for example.

“Today’s details on monthly spending figures shows a much weaker profile for spending in the first five months of the year and sets us up for weaker growth in the second quarter than the data would have suggested just 48 hours ago,” advise Wells Fargo economists.

The Atlanta Fed’s GDPNow model is even more pessimistic, revising down its second-quarter nowcast for U.S. economic activity to a 2.1% decline for real GDP (seasonally adjusted annual rate). The estimate is worrisome in that it follows a 1.6% decline in Q1.

Optimists can counter that the outlook for the U.S. labor market is still upbeat, based on jobless claims, which are considered a leading indicator. New filings for unemployment benefits have moderately increased in recent weeks after touching a 50-year low. Nonetheless, claims remain modest by historical standards, which implies that payrolls will continue to increase at a healthy rate for the near term.

Even if the economy avoids a formal recession, markets will remain concerned that the Federal Reserve’s policy tightening will persist. Following several rounds of interest-rate hikes, the central bank is expected to maintain its hawkish stance in the near term. Fed funds futures are currently pricing in a high probability of additional rate increases for each of the next three policy meetings.

The stock market is assuming the worst, including recession, or so it seems. The S&P 500 Index has tumbled more than 20% from its previous peak, which is widely seen as the start of “bear market.” 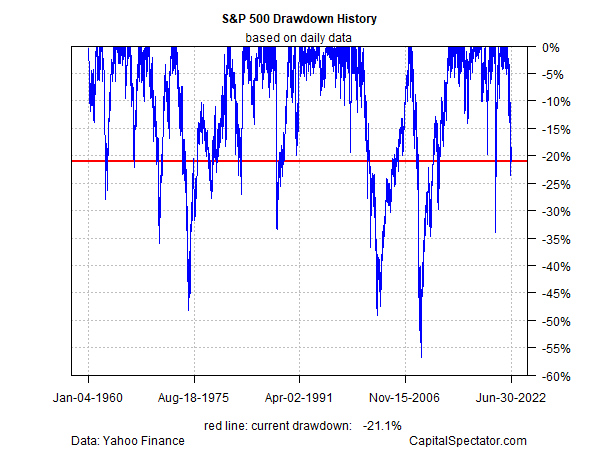 The average bear market in the post-World War II era is a relatively short affair, lasting about 11 months with an average decline of around 29%. By that standard, the current decline is half over (the market peaked in January) and most of the performance damage is behind us, according to LPL Research.

History offers some perspective for managing expectations in bear markets, but the critical factor is whether the economy slides into recession or not. That, in turn, may depend on how long the Fed raises interest rates. The longer the central bank’s tightening persists, the higher the odds of a recession and the deeper the contraction. In that case, the market will be looking for signs that inflation is peaking, which presumably would convince the Fed that it can suspend or even reverse its rate-hiking policy.

There are hints that pricing pressure is peaking, although it’s premature to assume that the Fed is going to ease up on its tightening bias without several months of evidence. That suggests any change in Fed policy will arrives soon after the summer at the earliest.

"A combination of slower wage gains, lower margin inflation, and the stronger dollar is beginning to drive a clear slowdown in core inflation," advises Ian Shepherdson, chief economist at Pantheon Macroeconomics. But with inflation still running at multi-decade highs, these are early days for assuming that the Fed will soon be convinced that the threat has passed.