President and CEO, The Milwaukee Company

The Covid-19 pandemic is no longer the biggest cloud hanging over Wall Street.  That milestone has been passed to government policy.  Many market participants have gone from cheering every round of covid-related stimulus to worrying what the massive influx of liquidity and the explosion of America’s debt obligations might mean for America’s future.

The federal deficit has surpassed $28 trillion dollars, which equates to nearly $85,500 for each American.  Perhaps even more disconcerting is the tremendous acceleration in the amount of the debt, as shown below.

The federal government’s response to Covid-19 has been a major contributor to the expansion of the nation’s debt load.  According to the Peter G. Peterson Foundation, Congress has spent over $5.3 trillion combating the pandemic, which does not include the $2.3 trillion that the White House wants approved for infrastructure improvements as well as a variety of social programs. 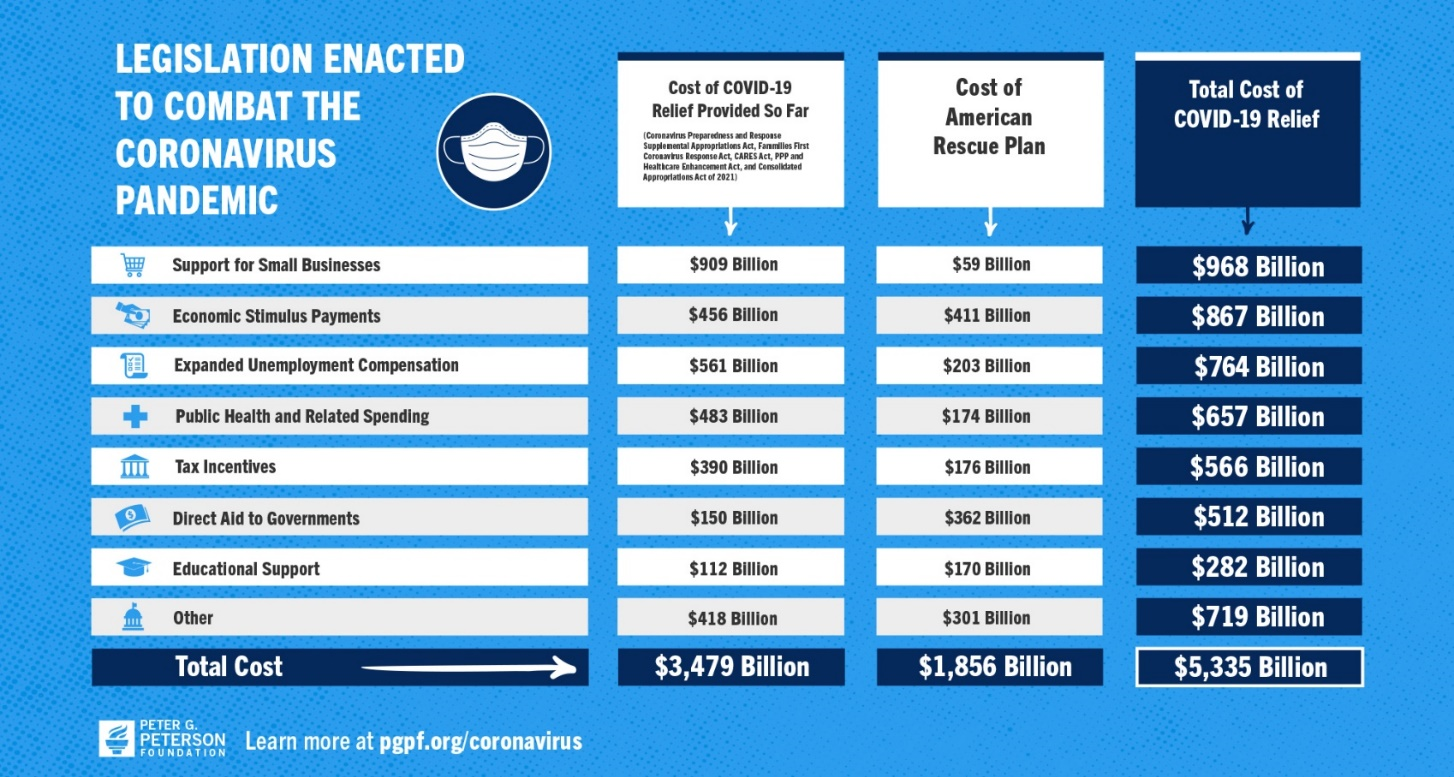 The Federal Reserve also took a broad array of actions intended to limit the economic damage from the pandemic, which the Brooking Institute estimates at a cost of $2.3 trillion.

The grand total of all of the above comes to just shy of $10 trillion, which far surpasses what the U.S. spent fighting World War II, even after accounting for inflation.  This combination of accommodative fiscal and monetary policies has stoked inflationary concerns.  In the University of Michigan’s latest survey, consumers said they expect a 4.6% increase in inflation over the next year, the highest reading in a decade, while 43% of the survey’s respondents said prices could rise by at least 5%.  Similarly, economists expect the consumer price index will rise by 3.8%, based on a survey by Bloomberg.

Are these concerns justified?  As is often the case with economics, the answer depends on who you ask.  The White House, alongside the Federal Reserve, insists that the recent jump in consumer prices will prove short-lived (or “transitory” in Fed speak).

Economists who support this view point say central bank money printing is largely irrelevant to money supply and inflation, so long as demand remains low.  They assert that an aging population and increased worker productivity have helped keep demand and wages low, and will continue to do so.  As evidence for their position, they point out that the money supply has been increasing for more than a decade but inflation has fallen consistently over the same time period.

Not surprisingly, fiscal conservatives disagree.  They argue the unprecedented extent of deficit spending makes this time different.  In their view, the Fed’s decision to keep interest rates low while buying trillions in bonds even though the economy is booming poses long-term risks.  Some even fear that America’s record level of deficit spending, and the heavy debt load needed to support it, threatens the dollar’s standing as the world’s reserve currency.

However, it's just not fiscal conservatives who are concerned.  For example, left-leaning economist Larry Summers (who served as Treasury Secretary and Director of the National Economic Council under President Obama) recently accused the Federal Reserve of “dangerous complacency” over inflation.  In his view, monetary and fiscal policymakers have “underestimated the risks, very substantially, both to financial stability as well as to conventional inflation of protracted extremely low interest rates”.

So who’s right?  I wish I could tell you for certain.  While I personally am a fiscal conservative, I recognize that those who believe that a higher-than-targeted inflation rate will only be transitory include some very smart people, and so their point-of-view should not be ignored.  That said, I believe the massive amounts of liquidity the federal government has injected into our economy poses a threat to bond markets and could bring a premature end to the ongoing bull market for stocks.

The risk, as I see it, is continued stimulus after the recovery has taken hold could cause the economy to overheat and push prices higher.  I also believe that the unprecedented increase in the money supply could cause the value of the dollar to drop, which would also be inflationary.   Potentially making matters worse, the Fed’s best weapon for fighting inflation – raising interest rates – may be off the table because the U.S. can’t afford higher rates on the amount it currently owes to holders of its bonds.

If you share my concerns, here are my thoughts on how you might want to lessen the adverse impact that inflation, and a corresponding rise in rates and market pullback, would unleash on your portfolio, should they occur.

1. Shorten the duration of your bond portfolio, but keep an allocation to bonds that is consistent with your tolerance for risk.

2. Consider rotating out of longer-duration perpetual-maturity-date-bond ETFs into fixed-maturity-date ETFs and individual bonds.

3. Consider investing in floating-rate bonds and Treasury Inflation Protected Securities (TIPS).   These types of bonds have gotten more expensive as concerns over the Fed’s policies have grown, but could still outperform other bonds if interest rates and inflation rise higher than Mr. Market currently expects.

2. Lower allocations to high dividend stocks, which can struggle if inflation erodes the purchasing power of the dividends they pay.

Then again, investors who have a longer investment horizon and who can tolerate price swings may just want to fasten their seat belts and prepare themselves for a bumpy flight.

Thank you for reading.